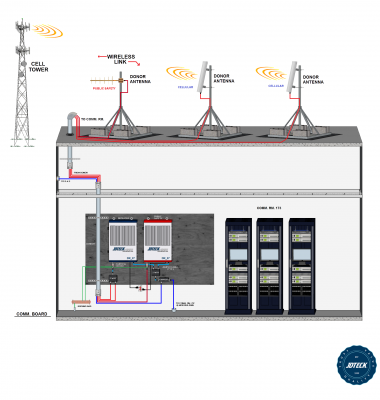 Distributed Antenna System, what does it mean?

The acronym #DAS means Distributed Antenna System. It comprises of several components mated together to create a network that distributes signals across a specified area. There is a misconception by many that DAS refers specifically to an active fiber solution, however this is logically incorrect. The word distribution in the acronym DAS would mean any system with more than 1 distribution point. Therefore a system with just 2 service antennas is accurately referred to as a DAS (A Mini-DAS) because you have 'distributed' the signal to more than 1 point.

There are two main types of signal distribution systems which are passive and active. A passive DAS solution in the true sense is not entirely passive but does has an active component at the heart of it called a repeater. The repeater is designed to receive a signal from a source point, be it OTA (Over The Air), via a Node / base station or Small Cell. The repeater then filters, amplifies and sends the boosted signal via a coaxial cable out to an engineered wiring grid that consists of coaxial cable, connectors, directional couplers, signal splitters and multiple antennas.

The service antenna is the last tangible component of the DAS before the signal then "jumps" or moves from that transmission surface wirelessly over the air.  In a typical active DAS configuration the source signal can also be received the same way, via OTA, node or small cell. The signal then goes to a repeater or some sort or bi-directional amplifier (BDA) which then connects to what is called a Master Unit. Instead of a coaxial connection to the distribution grid as in the passive configuration, the Master Unit converts the RF signal over to light / optical which then transmits the signal through fiber optic cable out to a distribution hub which then further extends this signal out to Remote Units. These remote units then covert the light signal back to RF which then connects to a wiring grid of components just like the passive system mentioned before. (coax, splitters, couplers, antennas)

One of the main purposes for using an active DAS is to be able to transmit a signal across a very large area using many service antennas with reduced signal loss and quality, that's because a portion of the transmission was sent over fiber optic cable. Another type of DAS is called an "O-DAS" this simply means an Outdoor - Distributed Antenna System. Again, this can be either passive or active in nature. To recap, DAS simply means Distributed Antenna System. There are passive DAS solutions and active DAS solutions. A repeater is just one component of a DAS and not some sort of different solution from a DAS but is one component of a DAS.