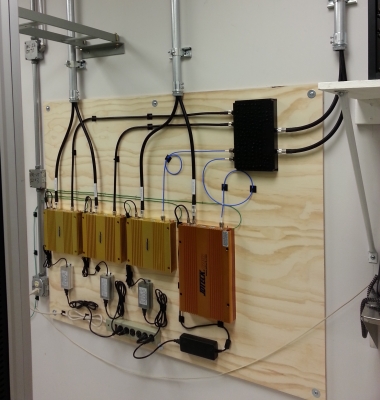 The CDMA network has, what is called a “cell breathing effect”. That is, the coverage will gradually shrink as the cell load increases. The cell breathing effect makes network planning more complicated. The CDMA technology itself determines that the load of the network at the early stage of construction should be higher than that of the GSM network. Therefore, adding carriers and roaming agreements between them is a major means of expanding network capacity, and adding BTS’s or Node B base stations is an auxiliary means of capacity expansion. The aim of the radio network should be to provide continuous coverage, instead of hotspot coverage. 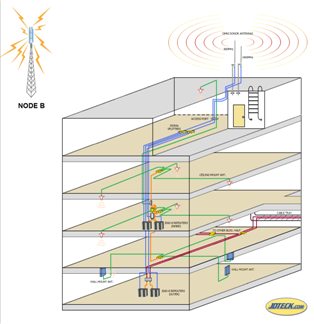 The cost of wireless repeaters are relatively low and the construction is simple. They have the functions of a mini BTS or Node B. On the network, repeaters can help a BTS or Node B to achieve the optimal network quality at a minimum cost.

A cellular tower typically supports a large capacity of users but is affected by a relatively small coverage footprint. Therefore, the number of users who can access it is limited and a large amount of channel resources are wasted. The best way of solving this problem is to use repeaters to extend the BTS coverage to fully utilize the telecommunication resources. For example, in cellular network construction in Asia, repeaters are no longer considered as peripheral devices to cover blind areas in the network but as part of the core network itself.

The complete coverage is not only a prerequisite for a high quality mobile cellular network, but also a factor that attracts users. From this point of view, a network operator should first consider providing a radio network with a complete coverage. The seamless coverage in urban areas, heavy traffic areas, office buildings, super markets, and top grade hotels is the first step to consummate the network.

In such a background, JDTECK has successfully developed advanced repeaters that are applicable to any mobile network and indoor distributed antenna system. (DAS) Repeaters are available to support any technology or frequency used today.

Because a large amount of BTS or Node B devices are deployed in densely populated urban areas, there is usually no large blind area. Repeaters are simply used to cover small blind areas and provide signal coverage inside buildings or sub-ground locations. Typically, radio frequency (RF) repeaters are used when optical fibers are not available in buildings or when using a fiber solution is not cost effective.

Since the number of repeaters on a cellular network usually increases with the number of buildings to be covered in a specific sector, multiple repeaters may end up feeding from one BTS or Node B. In view of this, only low powered repeaters (below 1 watt) should be deployed in densely populated areas.

Repeaters adopt an integrated module concept. It is compact in structure and combines the RF module and the monitoring mode in one unit. Owing to its high selectivity, stability and reliability, repeaters are widely applied to indoor signal distribution in small areas such as office buildings, meeting rooms, hotels, tea shops, night clubs, and cafes where signals are shielded. They are also used to cover shadow areas outdoors. Such repeaters are very suitable to signal optimization in densely populated urban areas.